About my last USA tour

The tour in the United States began with a week-long residency at the School Of Music Of Iowa, University of Iowa. Jean-François Charles, the professor of electroacoustic composition, was the curator of this residency. He proposed that I give several classes and lectures during the first part of the week, and that we finish with a workshop for six volunteers with whom we would build an electroacoustic improvisation concert.

The lectures were on the subject of “the programmer musician” a broad subject that defines me perfectly. I took advantage of this theme to go through my artistic creations of the last fifteen years (concert, installation, performances) which have for the most part the common point of using Logelloop.

If I believe the feedback from the students who attended these presentations, the particularity of my work does not lie so much in the fact that I program the software I use for my electroacoustic creation, nor in the fact that we also manufacture, to measure, the electronic equipment for diffusion (sound cards, processed loudspeakers, footboards, etc.).

The particularity lies essentially in the places and networks of diffusion and the relationship with the public. Indeed, I have presented several videos and photos presenting installations in gardens (Toco la Toccata, various performances), on beaches (Au bord d’un monde), in the street and performances that address particular audiences (Tubulus, Danse Tellurique) that are not the daily life of contemporary music composers that one can meet in the University of Iowa.

Offering concerts for an audience that is not captive, or even that can move around during the concert (Tubulus, Danse Tellurique), is something very unusual, which interested composers who are used to presenting their works in auditoriums.

Change of atmosphere for the second week! I arrive in California for concerts and a conference for the Y2K22 festival, twentieth edition of the international festival of Live Looping in Santa Cruz. Of course, in Santa Cruz I meet Rick Walker who is the founding artistic director of the Y2K LoopFest which has been so much emulated in the world. I also meet some American and Mexican specialists, some of whom I know for having already met them during my previous visit in 2017 or during my Mexican tour in 2018. Here, the concerts follow one another during the festival. This is an opportunity for me to take stock of what is being played in the field of Live Looping across the Atlantic, it is also an opportunity to exchange with musicians on the evolution of Logelloop and the relevance of some new features. 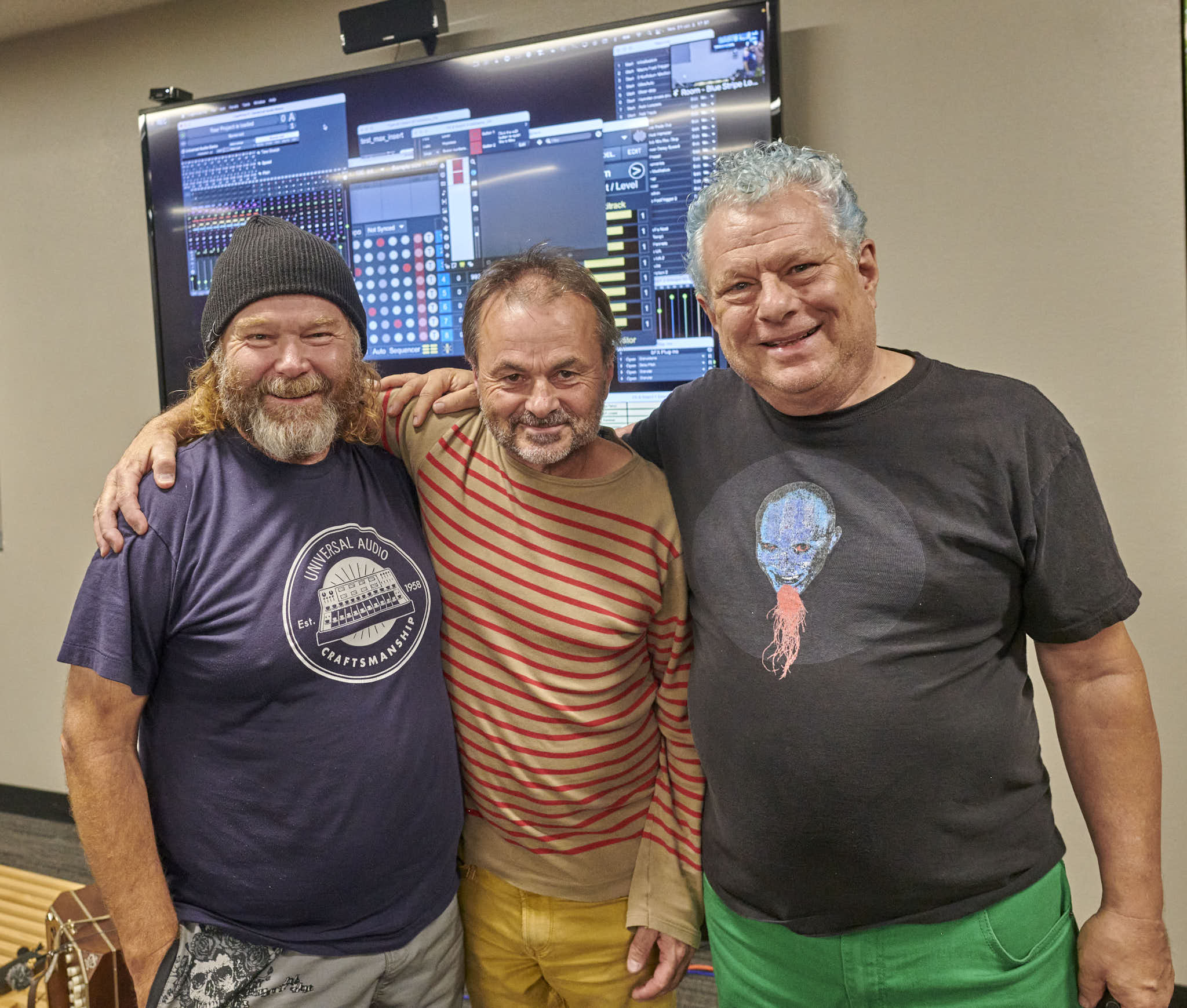 I presented these new features during a concert/conference at Universal Audio Corporation, one of the most prestigious software and interface development companies in the world. I had already met Bill Putnam, the CEO (Chief executive officer) of the company in 2017. This time he invited me to present my work to his engineering teams. About 40 people from one of the most innovative teams in Silicon Valley attended this presentation. This invitation reflects a great recognition from the software development industry of the work we have done on Logelloop for twenty years. The feedback was very positive, and Bill Putnam himself noticed a significant evolution of Logelloop’s functionality over the past five years.

One of the highlights of this week spent in California consisted in several conversations with David Zicarelli, founder and CEO of Cycling’74, the company that develops the Max software frequently used in contemporary music. Indeed, David, whom I have met several times in the last few years (at Ircam, in Santa Cruz in 2017, in North Adams in 2019) had offered to host me when I came to Santa Cruz, his home town. As a Max user myself (which we use as a software base for the development of Logelloop), a beta tester for Cycling’74 for more than fifteen years and a Max trainer at the University of Brest, this was an ideal opportunity to get feedback from Max users and also to discuss perspectives. David was in a frenzy as the company was preparing the imminent release of RNBO, a software package, the result of seven years of work that represents a major turning point for Max on which it is based.

With David the topics of discussion were diverse, I obviously told him about some features we would need for the development of Logelloop, features that would allow us to improve the performance or the user experience for the most part. We also talked about the future of Max and what will change for the users. David was also interested in Logelloù, our residency and support place for new music in Brittany, he is himself a donor for a similar place in Santa Cruz. This meeting should feed future exchanges for Logelloù and Logelloop. To be continued!

And then, last week on the East Coast with another important meeting. I was reunited with Todd Reynolds whom I have known since 2007, as he participated in the Logelloop beta test during the early years. I had also met him in 2019 in North Adams where he lives. This time, he invited me to animate a workshop about Logelloop with his students in contemporary music from the Manhattan School of Music. It was an opportunity to present the latest developments of Logelloop and also to improvise with him in front of his students. Todd is a remarkable violinist who has played with the greatest in New York (Steve Reich, Meredith Monk, YoYo Ma…), improvising with him was a highlight of this tour. Of course, we stay in touch with the idea of meeting again for a common project in the years to come.

Last stopover in Providence where the singer Laury Amat organized a concert at MayDay, a club which proposes electronic music concerts. Three other musicians who practice modular synthesis took part in the concert, for the first time in my life, I was able to listen to a duet which is based on the astonishing meeting of the accordion and the modular synthesis…

This tour was initially built around the residency in Iowa, supported by Jazz & New Music, a program of the FACE Foundation and the Villa Albertine, supported by the French Embassy in the USA, the French Institute, the SACEM and the CNM.